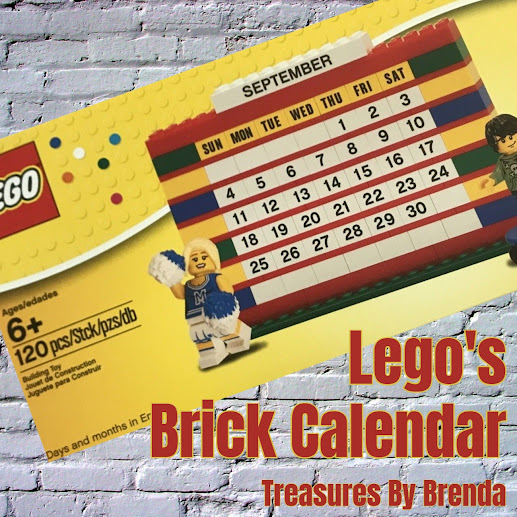 Lego's Brick Calendar, set number 853195, is perfect for this year and for next year and for the year after, too. It is a never-ending Lego-themed gift idea. It is a fun and practical desk accessory for the adult Lego builder in your life that it is also suitable for younger builders. It has 112 pieces and is recommended for individuals aged 6 and up.
I love the fact that this is an eternal calendar. You have a choice. You can either have an ordinary paper calendar or you can have this one, a Lego calendar that you build and rebuild every month.
It was released in 2011 but it is now retired. You can still find it on Amazon by clicking right here but as I write this, it is actually more affordable new or used on eBay. Click here to find your Lego Brick Calendar on eBay.
Happy Building!
Brenda

Discover Lego's Duplo Garbage Truck.
An adult-level set for those appreciate grocery stores or markets of the old-fashioned style. 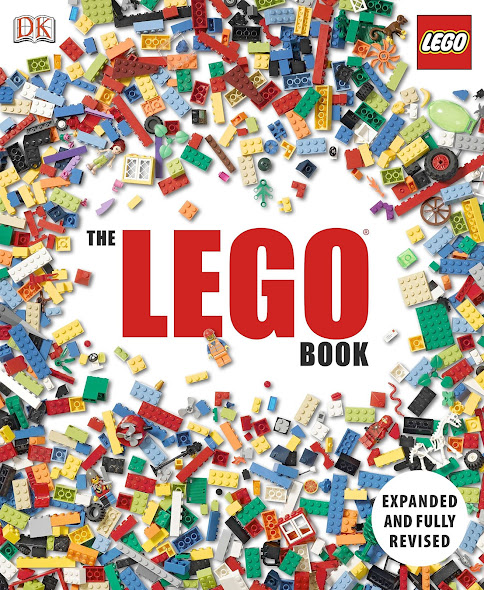 Within the pages of The Lego Book, a Lego fan will discover the story behind the history of the Lego brick. This is an updated version of the book and includes a timeline and information about the more recent Star Wars, Ninjago and Friends Lego sets. It even includes information about Lego’s movies and video games. This Lego Book is discontinued and therefore, the price of a new copy has gone up. However, used copies are very affordable and you can check out The Lego Book, new and used, here on Amazon. It is a book that belongs in every Lego fan's collection. 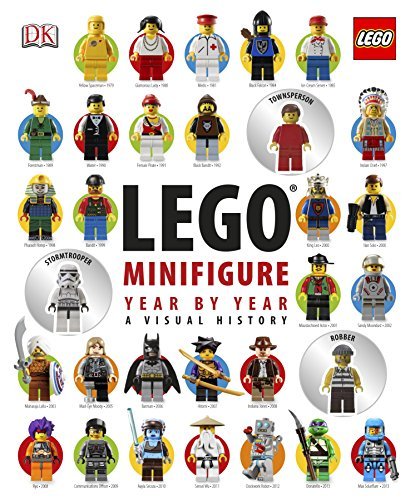 In 2013, when I was looking for a good Lego-themed book, the Lego Minifigure Year by Year Visual History by Gregory Farshtey and Daniel Lipkowitz also ranked at the top of the pile. It is another interesting option and a fascinating trip back in time for a nostalgic Lego fan. You can read more about it the Lego Minifigure book here on Amazon.
See you
at the toy store!
Brenda
MORE LEGO READING:
New, retired, used & vintage Lego in my eBay store.
Lego fans will enjoy checking out the retired sets in my eBay store.
Lego's Beatles' Yellow Submarine Set.
Know someone who loves Lego and the Beatles? This will be the set for them!
Lego's Typewriter Set
A throw-back to another time, adult fans who remember typewriters will enjoy this set.
Lego's Green Grocer Set
An adult-level set for those appreciate grocery stores or markets of the old-fashioned style.
No comments: 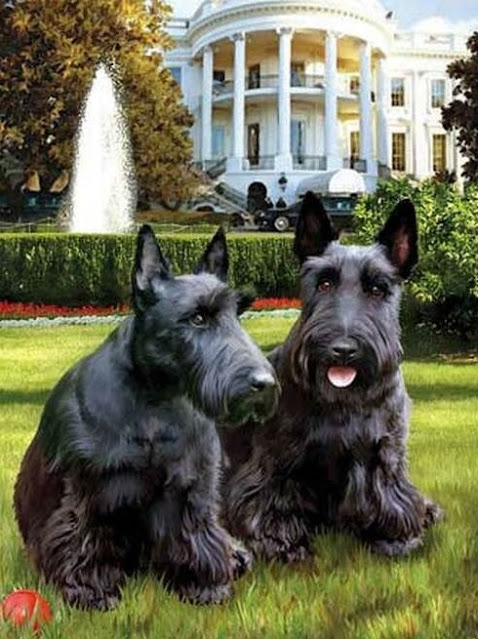 When President George Bush was to celebrate his 60th birthday in 2006, First Lady Laura Bush wanted to present him with a special present and she came up with a very special one indeed.
On this page, you will find more information about the gift that Laura Bush had made for the President, a jigsaw puzzle called Presidential Pets. A very fitting gift for a family that loved working jigsaw puzzles.
Since George Bush's favorite jigsaw puzzles featured artwork by Howard Robinson, the First Lady commissioned a picture of the White House and the presidential dogs, Scottish Terriers, named Miss Beazley and Barney.
Mr. Robinson is a British artist whose artwork has been featured on many products including china, record covers, posters and puzzles. His jigsaw puzzle, At the Waterhole, which features wild animals, was shortlisted in 2007 for the Ravensburger puzzle of the year.
Mr. Robinson was, needless to say, thrilled to have the opportunity to paint the Presidential dogs.  He is quoted as having said, "never in my wildest dreams did I imagine that the President of the United States of America would be sitting in Camp David doing one of my puzzles."
The puzzle is a 550-piece puzzle with a finished size of 18 inches by 24 inches.
There is another famous puzzle linked to the Bush family. It features the face of the Bush's dog named Barney. That puzzle is a wooden one, crafted from hand-cut mahogany created by a company called ELMS Puzzle that crafts puzzles freehand without the aid of computers. This puzzle was a gift to the President from the staff at the White House.
Happy Puzzling!
Brenda 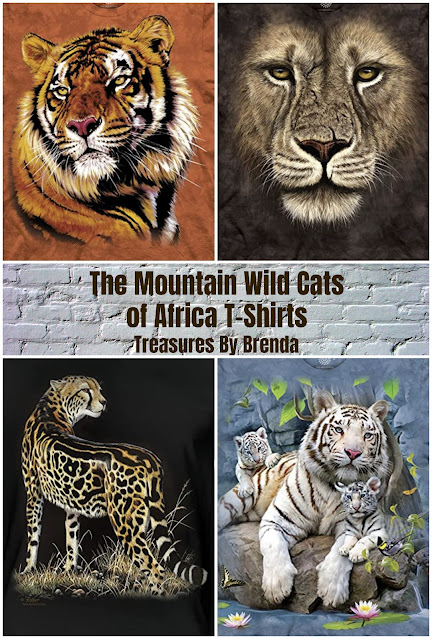 Disneynature's African Cats movie brought us all closer to the lions and the cheetahs of the African Savanna. On this page, find a couple of these amazing beasts on a t-shirt by The Mountain. Although you should know that The Mountain has a lot of lion shirts and fewer cheetah shirts. But the ones they do have, you will love.

The Mountain shirts are both beautiful and well made. They are t-shirts like you have never seen before, hand dyed and made in an environmentally friendly manner plus they sport some of the best wildlife artwork available.

This lion tee features a lion, up  close and personal. In your face, as they say. This style of t-shirt is very popular and buyers have a lot of good things to say about their quality. Check out the selection of The Mountain lion shirts here.

The tiger. The largest of the cats. According to Wikipedia, he can reach up to 11 feet in length and weigh in at 670 pounds. He's the third largest animal that lives on land and of course instantly recognizable because of his stripes and red or orange fur. In the case of this t-shirt, you'll be sharing his face with the world.

The White Tiger is a relative of the Bengal tiger that lives in parts of India. He has a gene that causes him to be white and often a bit bigger. According to Wikipedia, white tiger numbers are actually on the increase. Their unusual coloring has made them particularly of interest to the public who looks to see them in zoos and other forms of entertainment that includes exotic animals. Check out The Mountain's selection of Tiger t-shirts on Amazon here.

Cheetah fans will already know that the cheetah lives in Africa and the Middle East. They'll know that this animal is faster than any other animal on land, that it can run up to 75 miles per hour and that it can go from zero to 62 miles per hour in just five seconds. Pretty impressive...and so is this t-shirt! See The Mountain's cheetah t-shirts here. 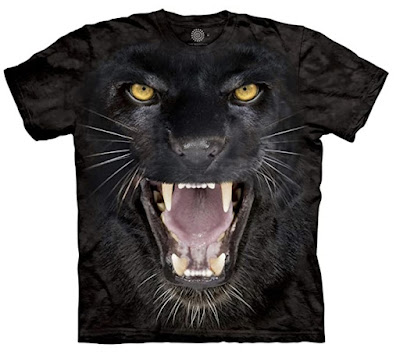 The Story of the Thrift Store Detective 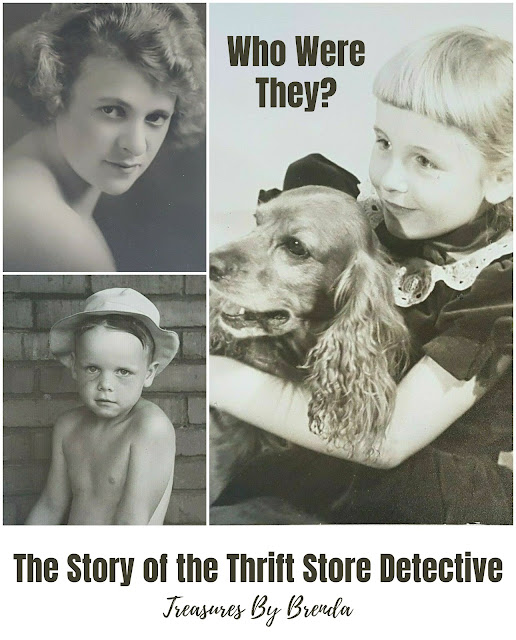 I read an interesting story in yesterday morning's Ottawa Citizen about a woman named Chelsey Brown who is a 'Thrift Store Detective.' As an eBay seller, I often wonder who the people were that appear in the photographs that I find. How old were they when the photograph was taken? What was the occasion of the picture? Where did they live? What path did life take them down?

Highlights of the items that Brown has found in her adventures include letters, photos, cards and even Second World War ration books. Instead of selling these items, however, she has instead undertaken the difficult job of attempting to return them to their original families. Once she was returned love letters written in the 1960s to the original recipient. Imagine that. I wonder how that woman felt when she received those letters back and what the rest of her love story would tell.

Anyway, Brown starts her process with items that have a clue of some sort like a name, a date, an address or some other helpful hint.  The Citizen says that her success rate is 80 percent. Pretty amazing and definitely very interesting for those items that return home.

I doubt that I would have the skills necessary to tackle such a job so I will stick with reselling the items that I have found that generally have no obvious link to the past. The vintage black and white photographs shown above are all without any identifiers. No names, no dates.

I think there is a moral here and that is to cherish a few items from your past and to make sure that they are identified as such for the next generations. I do remember one elderly friend who did this and who put little notes on or with things so that in the future family members would know where they had come from and the importance or family connection of each item.

Do you have pieces of treasured ephemera that tell a story from your past? I would love to hear from you.

Discover these and other vintage B&W photographs in my eBay store.