How About A Nice Hawaiian Punch?

"How About A Nice Hawaiian Punch?" asks Punchy...


Take a trip back with me to a place where the tradewinds blow, where the pace is calm and where the Hawaiian punch flowed or if a bit of realism is required, to my home in Canada one hot summer day in the late 1960s on grocery day when my Mom served one of those big cans of ice cold Hawaiian Punch...

I do and I'd have to say he is firmly entrenched in the memories of my childhood. Hawaiian punch anyone? Take a little summer trip with me and learn a bit about the history of Hawaiian Punch and Punchy, find some links to more reading and some links to collectible and vintage merchandise celebrating Hawaiian Punch, the beverage of my childhood. Don't miss the videos. They are definitely not high definition but they will take you on a trip back in time. We did not drink pop when I was growing up, it was a very rare treat. Instead we drank Hawaiian Punch. How about you?

(Check out these retro-inspired Hawaiian Punch t-shirts on Amazon by clicking here.)

What is Hawaiian Punch? 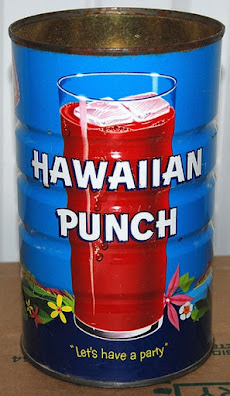 Hawaiian Punch is a fruit punch drink with 5 percent real fruit juice that is now owned by the Dr Pepper Snapple Group, Inc. It was originally invented by A.W. Leo, Tom Yates and Ralph Harrison as an ice cream sauce in 1934 and was later made into a tasty drink when it was mixed with water.

In 1934 Hawaiian Punch was developed in California in a garage and in 1950 the 46 ounce can was distributed to grocery stores. Punchy was born in December of 1961 and appeared in his first television commercial in 1962.

In 1999, Dr. Pepper/Seven Up purchased Hawaiian Punch and thought of re-using the Punchy mascot. It was thought that Punchy was a rather violent character for a product aimed at youth since his reputation is based on his punch. Great consideration was given to see how or even if Punchy could be used in a less offensive manner. Teenagers remembered the original version of Punchy which meant that he was still a valuable asset to the company. It was determined that his main appeal was his uniqueness and his punch which was not so much an act of violence as a metaphor for overwhelming refreshment.

In 2003, Punchy had a makeover to appeal more to the youth of the day.

How 'Bout It? A Nice Hawaiian Punch

If you grew up with Donny and Marie, this YouTube video is sure to have you smiling.

In the marketplace, there is much Hawaiian Punch merchandise available. That means there are vintage pieces as well as new pieces so you can have whichever you prefer. Personally, I love the advertisements shown below and think they would be great framed and displayed in a pop culture fan's collection.  You can see which of these ads is available on eBay today by clicking right here. Additionally you can have new and used t-shirts, toys, ephemera, patches, pins and so much more. See eBay's collection of new, used and vintage Hawaiian Punch collectibles by clicking here. 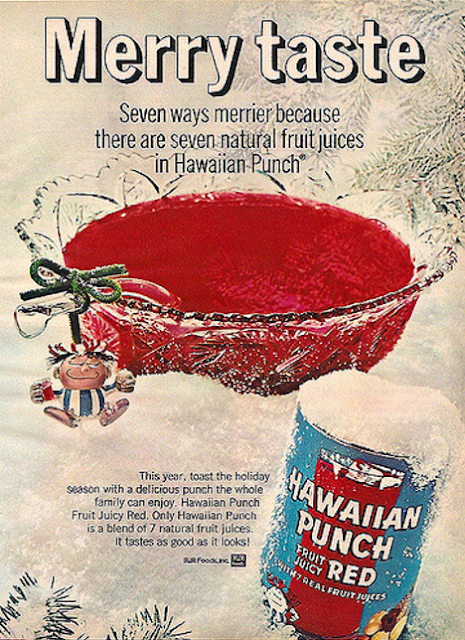 
What memories does Hawaiian Punch hold for to you?

Brenda
You never know what I might
have in store for you! 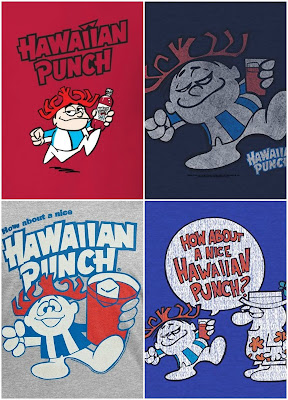