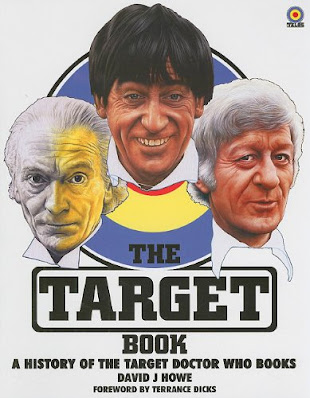 I've been busy listing the first of a number of Doctor Who book sets in my eBay store. It is going to be a long process and I am trying to commit to listing six books a day. Wish me luck!
UPDATED TO SAY: ALL OF THE BOOKS IN THIS SERIES HAVE BEEN SOLD.

This huge collection belonged in a sense to my son because they were purchased for him.  However, he never had the opportunity to read them and now he is moving to Seattle and leaving them behind to be sold on eBay...

The first set that I am listing is the Target Books paperback series, which was published between the years of 1973 and 1991. I read that Target started with new releases of the books by Frederick Muller and that the last three books were released by Virgin books after they took over Target.  Those last three titles were The Power of the Daleks and The Evil of the Daleks by John Peel and The Paradise of Death by Barry Letts.

I'm learning a bit as I work my way through these books.  If you have already read them, you no doubt know more about the history of them than I do and probably remember them fondly from years gone by.

I had the opportunity to meet a customer who purchased three books from me shortly after I started on this Doctor Who adventure. He was thrilled to find the titles that he needed to complete his collection.  He purchased The Rescue by Ian Marter and The Planet of Giants and The Wheel in Space by Terrance Dicks, his collection is now complete and my collection no longer has those titles available. It was really rewarding to see his appreciation for the books.

All of the books that I have listed so far have been in pretty good condition with yellowing as befits older paperback books and a small irregularity at the top of the spine, which was caused by the removal of a small sticker. I expect the rest of the books in this collection to be in the same condition.

If you are missing a title or two, be sure to visit eBay to complete your collection. See all of the vintage Doctor Who books on eBay by clicking right here.

You never know what I might
have in store for you!
Brenda

By chance, I stumbled across The Target Book: A History of the Target Doctor Who Books by David J. Howe on Amazon.  I would love to have a chance to look at it but it appears to be a very hard-to-find book, which translates directly into it being very expensive on Amazon.

Note: As an Amazon Associate I (we) earn from qualifying purchases.