Jenga is an addictive building game requiring both hand skills and mental skills. It was designed by Leslie Scott for children and adults to play together. It's an extremely easy game to learn with simple rules and, because it is different every time, it never gets boring. You simply create a tower by stacking the blocks and then cautiously remove one from the bottom of the tower and place it on the top of the tower, hopefully without causing your tower to fall.

In the 1970s, Lesley Scott created Jenga from her own family's building bricks. In 1983, she trademarked Jenga at the London Toy Fair. Since then, according to Wikipedia, over 50 million Jenga games or 2.7 billion Jenga blocks have been made.

Watch this short video in which creator Lesley Scott Speaks about the invention of Jenga:


Today, Jenga is produced by Hasbro's Parker Brothers division. It's a great family game that has evolved in some interesting ways. On this page, discover some of the other versions of the family game, Jenga.   Click here to check out all the Jenga games on Amazon. 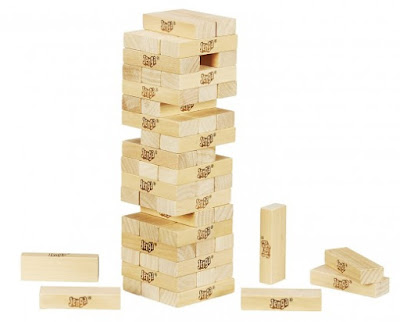 In the basic Jenga game, you receive 54 rectangular wooden blocks that are designed perfectly for stacking in a three wide, 18 story tower. Once you've created the tower, you take turns removing a block one at a time and putting the piece back on top of the tower. One wrong move and it will all be over. Order this basic Jenga game from Amazon here.

Here is another short video in which Blake Griffin and Kevin Love, famous basketball players, put their skills to unusual use with Jenga tiles. 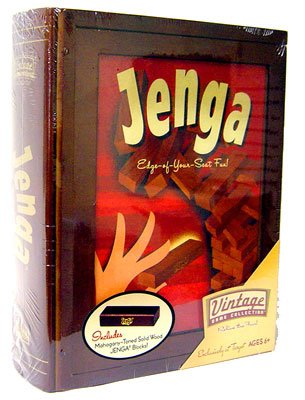 If you or someone you know has fond memories of Jenga, you might want to consider gifting them with this version of Jenga, which is packaged in a book-like box. Unlike the typical Jenga games packed in a cardboard box, this one will last and look handsome on your bookshelf. Unfortunately, this version is out of production and sought after, which means the price has been driven upwards by the laws of supply and demand. You can find the Jenga Vintage Wooden Book Edition from Amazon here. 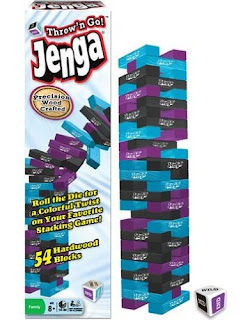 
IN THROW'N GO JENGA THE DIE DETERMINES THE MOVE.

Throw'n Go Jenga consists of blocks that are colored in three colors and a six-sided die. When it is your turn, you throw the die and follow the instructions according to the roll of the die. Each color refers to a certain type of move. For instance, if you roll a red on your turn you must move any red or middle block. You can order your Throw 'n Go Jenga from Amazon by clicking here. 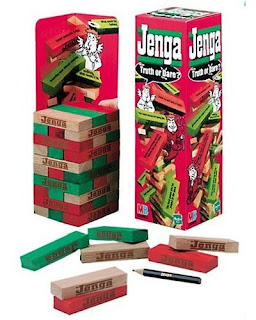 In Jenga Truth or Dare, adults play with three colors of blocks - red, green and natural. Play is much the same as in the ordinary version of Jenga but if a player picks a red or green block, he must either complete a dare or answer a question before he may place it pack on the tower. Natural colored blocks have nothing printed upon them and are played as an ordinary Jenga block unless you choose to spice up the game by adding your own truths or dares on them. You can find the Jenga Truth or Dare game on Amazon here. 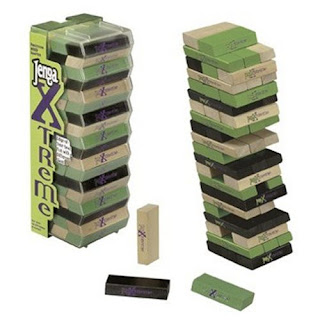 
Jenga Extreme is different because of the shape of the blocks. No longer are they typical rectangles but now they are parallelograms. You will create some interesting towers with Jenga Xtreme! Order Jenga Extreme from Amazon here. 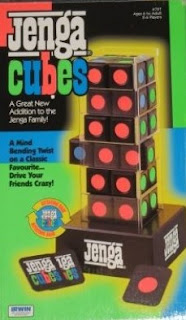 
Jenga Cubes is a rare 1998 version of Jenga that, according to the box, is a "A Mind Bending Twist on a Classic Favourite that will Drive Your Friends Crazy." It features 25 Jenga cubes that stack inside a plexiglas tower that has slots cut out on alternating sides at each level. The object is to push out a cube leaving the cubes around it in place and the game play is a bit different than a standard Jenga game.

As I write this, Jenga Cubes is not available on Amazon but is available occasionally on eBay. To see today's eBay search results for Jenga Cubes, follow this link.


Collector Edition Jenga Games include Jenga games dedicated to many major-league baseball teams, John Deere, Hello Kitty, the Transformers, Tarzan, Donkey Kong, Tim Burton's The Nightmare before Christmas and more. I expect there are more created on a regular basis.  You can see all of the Jenga games available on eBay's by clicking right here.

Have you played Jenga? Which version(s)?