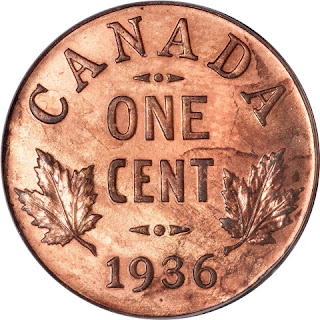 Here's a rare penny to be on the lookout for, a 1936 Canadian cent. However, given that it is one of only three known examples ever produced of the coin, finding one just isn't going to happen.

It's a complicated story entwined with the royal family.  The Royal Canadian Mint was concerned about a coin shortage in 1937 and so minted this coin using a picture of the old George V coin because they did not have an image to use of the unexpected new king when Edward VIII abdicated and George VI took the throne.

Because the Mint did not want this coin to be confused with earlier pennies featuring George V, they put a dot under the date, which you can see in this image from the Ottawa Citizen.

However, the shortage of pennies never happened and only three samples of this coin were ever made, making them extremely rare and sought after.  Some believe more coins may have been made but eventually used to create another coin.

If that's a bit out of your price range, but you're interested in seeing what Canadian pennies usually sell for on eBay, here's a sampling of one cent coins available right now on eBay:


See you
at the auction!
Brenda